I met Mike after I moved to Cape Town in 1977 and he was one of the most influential people on my musical path.

I distinctly remembering him 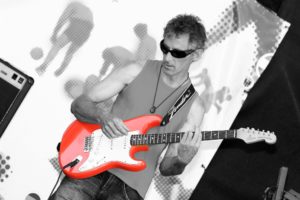 persuading me to buy my much-beloved Fender Jazz Bass, an original pre-CBS 1961 black and white for R100. From then on we spent hours jamming at his house in Observatory and listening to serious Progressive Rock bands like Gong, Gentle Giant, Caravan and Camel.

In 1977, we joined Michael Laden, a local keyboard player to form Innisfree.

During the 1977 Christmas-New Year season, Mike and I played a gig at the one and only hotel in the seaside town of Stillbaai, South Africa for the Christmas/New Year holidays. Andrew was the main frontman playing guitar and singing lead vocals. Clive Thomas (Innisfree) played drums but replaced by Niall Bell for the New Year Party.

On the day Mike was leaving Cape Town (for good) to Switzerland, we recorded the following jam with John Aronowitz on keyboards, Mike on guitar, me on bass & Lenny on drums.

Mike returned to Cape Town on vacation in 1986 and we got together and jammed the following with Dave Kibel on keyboards, Niall Bell on drums and me on bass.